Why Sudden Windfalls Aren’t The Blessing You Think They Are 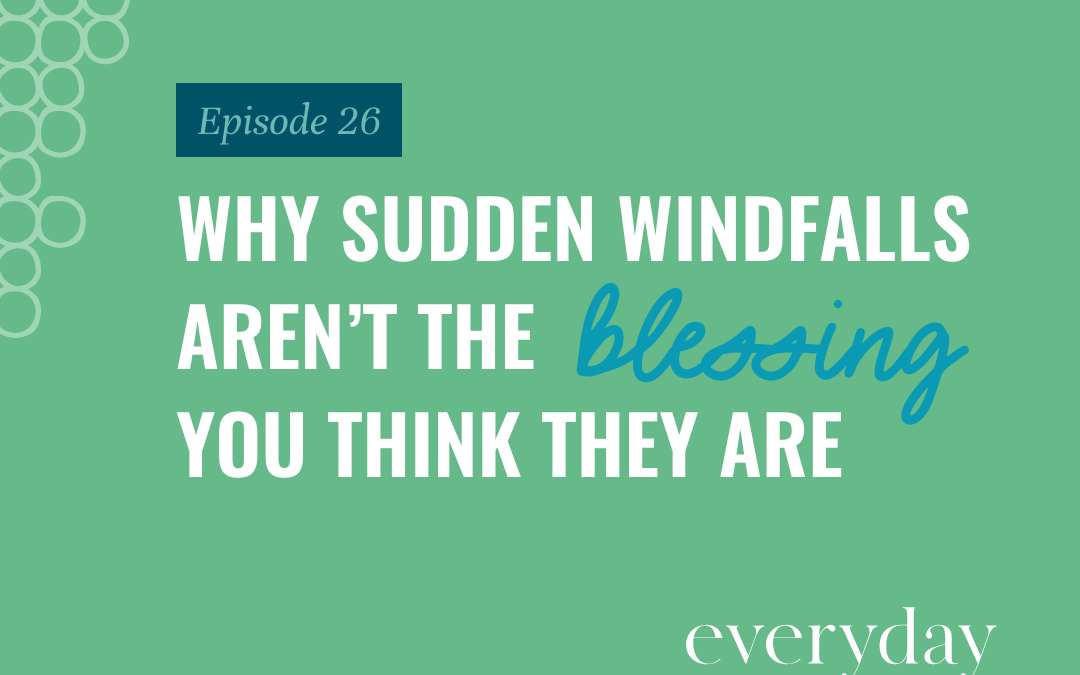 We’ve all seen the stories — the lottery winner who gambled away their earnings, the sports star who spent all their money on yachts and private jets. People who received inheritances and lost it all within a year.

Why is it that these sudden, large influxes of money are so hard for people to keep and manage well?

Today, I want to dive into some of these reasons, as well as tell you a bit about how you can manage your money wisely if you were to get a sudden influx of cash. Of course, I do want to put a caveat on this: it’s not true for everyone. Some people get a windfall of money and manage it very well!

Why does this happen?

So, when people do get a large sum of money, why is it so easy for them to lose it all?

The most common reason is because they’re people who have never dealt with that much money before. So they simply don’t have the experience to manage it the way they hope.

The first question I ask clients whenever they are in a “sudden windfall” situation is: how does a millionaire spend money?

One of the biggest things a millionaire does it they know the rhythms of what they have to do.

Most of the time, it’s because they have the context around their money. They often didn’t become millionaires overnight, so they know what it takes to build and maintain their wealth.

Someone who just inherits the same amount of money doesn’t have that same context.

How can you protect your money if you get a sudden windfall?

Of course, winning the lottery is unexpected and doesn’t often leave you much room to set up protections for yourself. But if you’re leaving a large inheritance to your children or relatives, it is possible to make sure they’re protected and can keep that wealth for as long as possible.

Set up a trust

Most people do this by setting up a trust. This is especially important for minors.

In a trust, you’ll need to decide when a child or person gets the money. One of the most common things I see is that people are given a third of the money at one age, the next third a few years later, and the final third in another few years.

This gives them plenty of room to make a few mistakes with their smaller amounts of money, but by the time they inherit the full some, they will hopefully have more context around how to manage it.

Work with a financial planner

So, if there is no trust or you’ve come about a large amount of money in a different way, how can you protect yourself if there aren’t stipulations?

The first thing I suggest is to work with a financial planner!

Talking to someone that will help you put your decisions into context is so valuable! Buying a house then becomes about the long-term upkeep costs, instead of just the upfront costs.

Get clear on your values

At the end of the day, you guys know that one of the most important tools I believe you have at your financial disposal is your values. Not just your monetary values, but your life values as well.

Part of what you should decide is what you’re willing to do versus not willing to do. There will likely be many people in your life who might expect things from you. On top of that, you do have the opportunity to give more than ever before!

Sometimes, you’re going to have to say no to people close to you to continue supporting your values. And other times, you will be able to say yes (which is the best feeling in the world!)

At all times, you need to be looking at the bigger picture, and understand the long term impacts of what that money or spending is going to do for you!

Even if you haven’t received a large windfall of money, you never know when it could happen. It’s always great to run through these scenarios and ensure you’re prepared should a large sum of money come into your life!