The Story of the BudgetingBlocks™ 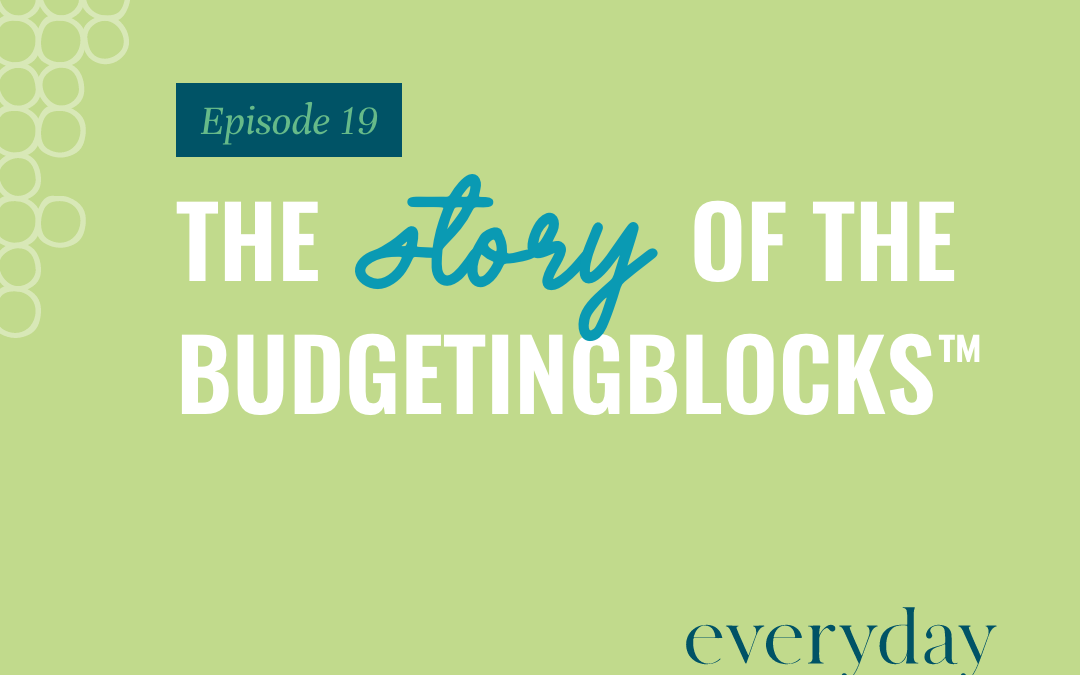 When you think of creating a budget, you probably think of spreadsheets and “envelopes” or “jars.” There’s a lot of math involved and you have to be super attentive to every penny. But to me, that method of budgeting doesn’t work for everyone.

Why? Because many people need to SEE their money as a whole to really understand where they want to spend and save. So I came up with something new: The BudgetingBlocks™.

The BudgetingBlocks™ is an interactive tool that people visualize their money in a new way, and I have had so many other financial planners and clients tell me it changed the way they thought about budgeting. So I wanted to tell you a bit more about them and what they might help YOU do.

Where did The BudgetingBlocks™ come from?

As a Certified Financial Planner™ professional, I think in strategy and numbers. I love all things numbers, spreadsheets, and personal finance. So when I started working with clients who needed a budget to manage their cash flow, I approached my services in the same way that most financial planners do.

I’d build out a budget, hand it over, and tell them, “Here’s your budget!”

But I quickly discovered that didn’t work very well. Most clients just simply didn’t buy into a budget they didn’t have a hand in creating, which meant that they weren’t sticking to the budgets I created. So I had to stop, take a step back, and recognize that the traditional methods of financial planning simply weren’t effective.

For a short time, I reverted back to “big picture” financial planning, where my clients wouldn’t have a strict budget, and they would simply tell me what their money looked like at the end of every month.

And again, this never felt right. It continued to bug me that I had all this financial planning knowledge, and yet I still wasn’t able to help people in their day-to-day lives.

Finally, I met a financial psychologist at an event, and my entire perspective on financial planning changed.

He told me that anything I could tell people… I could also show them. That was an epiphany for me. I couldn’t believe how many times I’d simply told clients what to do and expected them to follow through, without showing them how or why.

I was basically expecting their brains to work in the same way mine did. But if that were true, I’d be out of a job!

Soon after that, I had a high-income couple come into my office. Their problem? At the end of the day, they had no idea where their money was going. They were making over $400k per year and yet didn’t know what they should be saving, spending, and investing.

A lightbulb went off in my head and I realized that I needed to show, not tell, them how to organize and plan for their money. I was trying to figure out a way in which I could show them where their money needed to go. I ended up going to a learning store and picking these blocks that kids use to learn fractions.

The next meeting I had with them, I brought in those blocks. I gave each one a certain value amount (adding up to their total yearly income), and had them move those blocks around the table to show how they were spending their money.

By the end of exercise, they realized they had overspent. So I swapped out the colorful blocks for red ones to indicate that they were “in the red.”

Immediately, they were able to visualize just how much money they were overspending each month.

Now that we had a visual cue for where and how they were spending money, I walked my clients through one of my favorite exercises: the values exercise.

The first thing I asked them was to determine where they were happy about spending their money. I firmly believe that every dollar we spend should bring us joy, so this first question is one of the most important ones.

But as we were doing the values exercise, they realized something. When they combined their mortgage with their other debts, they were paying an astronomical amount of money in debt each month.

Now, they’d had all of this information in their spreadsheet, but until they had the visual cue of the blocks, they were able to fully comprehend what their debt looked like. Immediately, they decided that they needed to fix this aspect of their budget, and the cool thing is…

They did it. All because they were able to see their money differently.

BudgetingBlocks™ allows you to fully see your money, and then it allows you to prioritize it. The truth is that most people’s brains don’t think in numbers. And as a CFP®, it’s not my job to continue throwing numbers and budgets at you. It’s my job to figure out how to help you see and understand your money.

The blocks allow us to simplify a budget and have truly meaningful conversations around our numbers, instead of trying to wrap our heads around where we can or can’t spend money.

So if you’re having trouble with your money and budgeting, know this: it’s not because you don’t know how to view money. Instead, it’s because nobody has figured out how to communicate with you in a way that makes money accessible to you!

I firmly believe that, once you’re given the right tools, you can easily understand and stick to a budget! The great thing about the BudgetingBlocks™ is that they’re an awareness tool. Having an awareness of your money is the first step to becoming conscious about how and where you spend money.

Sit down, once a month, and examine where you spend your money with a tool like mint.com. Whatever state your finances are currently in, you can take control of your budgeting by taking small steps that will ultimately move you closer and closer to your goal.

Resources Mentioned In This Episode